We've noticed this is not your region. Redirect me to my region
What do you want to learn today?

The Gaiety School of Acting

The Gaiety School of Acting

The Gaiety School of Acting – The National Theatre School of Ireland is a Not for Profit organisation founded in 1986 by the internationally renowned theatre director Joe Dowling, in response to the lack of full time actor training programmes in Ireland at that time. The school is now widely regarded as the country’s premier training facility for actors.

Through a committed and dedicated staff, the school has developed and expanded to its current position where over 2000 students are involved in a wide range of courses from our intensive two year full time actor training programme to a range of courses available to students from overseas. These include The Original Theatre Project, our one-month Irish Theatre Summer School and our three-week January or May Irish Theatre programmes.

The school is based in the centre of Dublin city’s cultural quarter, Temple Bar. Our range of part time courses take place at other centres around the country.

Nationally and Internationally The Gaiety School of Acting is proud to be The National Theatre School of Ireland. 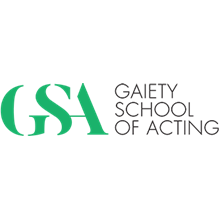